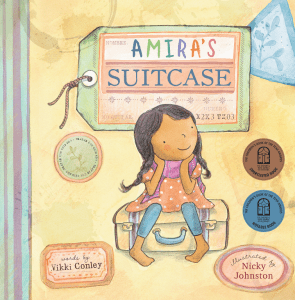 Amira’s Suitcase written by Vikki Conley and illustrated by Nicky Johnston provided an interesting discussion for Kindergarten. After reading the story we discussed ideas of why Amira needed to hide, where she moved to, and what changed for Amira during the story. The idea of time passing as the plants grew and the friendships she made also offered ideas to explore.

The book was a Children’s Book Council of Australia Shortlist and won the Honours award. Kindergarten illustrated plants and flowers they would like to grow if they were in the story with Amira.